Heaven by staywritechill
[Reviews - 1]
Table of Contents [Report This]

Literally have had the story in my head, or something like it since the song came out. Edits will probably be made.

M just to be safe. 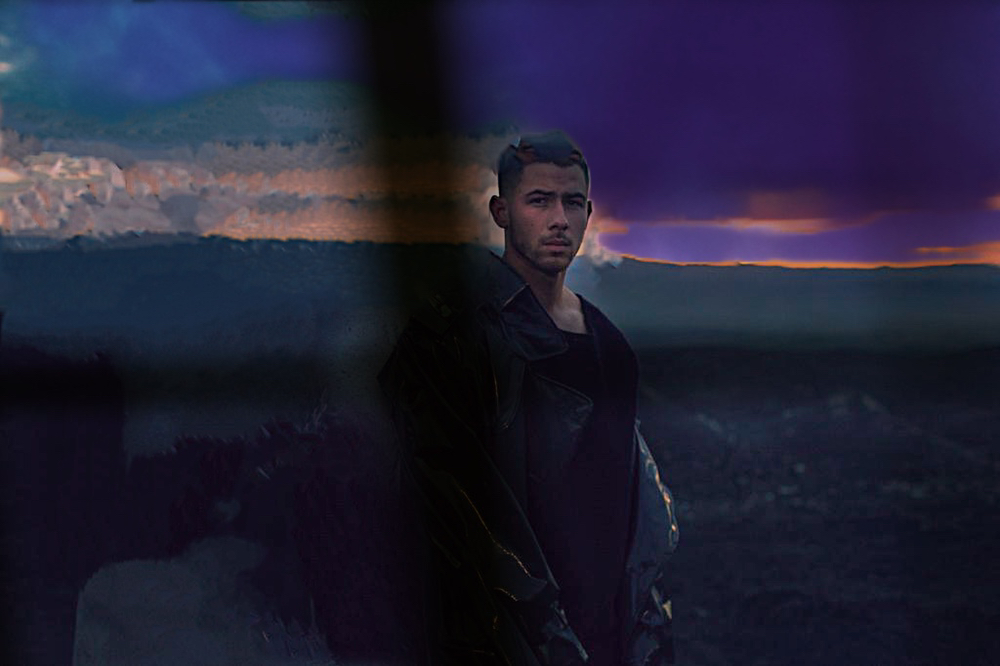 Little edit I did on a new photo editing program on my phone. Thought is fit this story well.

Nick's heart sped up as the car turned in the drive, through the gate and up alongside the house. Somewhere in the distance one of the dogs barked. Nick nodded at the driver and reached to open the door for Priyanka while taking her suitcase with his other hand. He was so glad she was home.

"Glad" was an understatement, a little voice in his head snickered if the rise in his jeans was any indication.

He knew without having touched her his body wanted her, and as soon as the door shut behind them and her luggage lay forgotten she was in his arms, his lips on hers. That, however, was only the beginning. Nick wanted to get away from the chaos that had been ensuing in the world lately, his world that had only included the house something that was just lockdown and the pandemic. Something he was already getting tired of.

His hands slid from her shoulders to her waist and from her waist to her hips and her backside, which fit in his hands perfectly. She didn't argue with his advances, but she didn't say she was too tired either-not yet. Though he was a gentleman enough to stop if she wanted to, he just hoped she didn't. It was just a start, the promise of things yet to come his hardness against her softness and barely intelligible words passed between lips that didn't seem to part. That was just how Nick wanted it.

Her arms slid around his neck her breath catching on his lips. They fumbled their way down the hallway to their bedroom clothes falling as they went, somewhere in the back of his mind they bumped into something, a dresser or the doorjam but neither of them cared. Clothes disappeared one right after the other things ending up in various corners of the bedroom. Priyanka laughing quietly as they tumbled onto the bed, her shoes falling with a soft "clunk" nearby. Nick removed his own shoes and socks in a few short motions only briefly breaking their contact; he didn't want to let her go, stop touching her. Finally, he turned his attention to the rest of her clothes her stockings, which he only found frustrating. He murmured in appreciation as he eased them over her hips and down her legs.

"These are slowing me down, babe."

"I'll keep that in mind." She murmured huskily.

He kissed his way along her legs from her knees to her hip then to her inner thighs where he knew her body was ready for him. Nick bit his lip in anticipation… So ready. Finally he slid down her panties, exposing her eager, wet folds. She whimpered, shifting restlessly on the bed, reaching for him to push his boxers down over his hips. Then he resumed kissing her, kissing her all over like he was a man starving. When they finally came together he sighed,, he moaned, showing her without words how much he missed her. Nick couldn't even tell her what he was thinking, what he was feeling he didn't have the words for it at least not to speak. He even said sometimes he articulated better in song than he did speaking verbally.

They made love until neither of them could really keep their eyes open until they both fell asleep their bodies still entwined unwilling to stop being connected. Nick didn't even want to sleep he wanted to see every nuance of her see the light in her eyes and those things only he was privy to.

When Nick opened his eyes again sunlight was coming through the window and Priyanka was smiling at him. Her smile said it all, the satisfaction, the love, everything they both had missed.

Priyanka moved to roll out of bed, but Nick reached for her.

"Don't go." He mumbled, his voice still raspy from sleep.

"I have to take a shower I believe the flight and the trip left me feeling less than human."

Nick made a noise.

She leaned over to kiss him softly.


As Nick lay there waiting for the shower to stop running an idea was formulating in his mind. A song without lyrics, but at least ideas and scraps of melody. He reached for his phone before realizing it was on the other side the room then got up to retrieve it before the idea left his head. He recorded a voice memo to send to Greg later. At least it was a start of something.

Finally Priyanka returned dressed only in a towel her hair still damp. Then they picked up where they had left off, though Priyanka assured him they had to eat breakfast at some point. Nick's head swam, both with adrenaline and arousal though he wasn't thinking about any song in particular he knew this was a feeling he wanted to write about. Something that could only be described as euphoria.

You must login (register) to review.