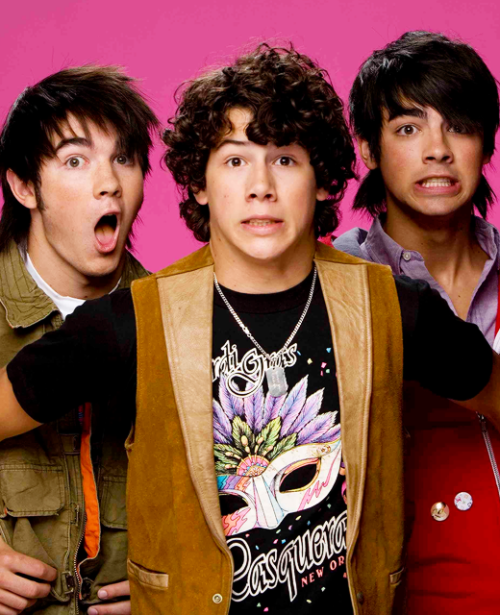 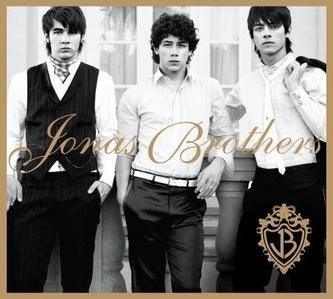 It was a normal school night for the Jonas family, Melissa was hanging out at their house as she normally did. The tension throughout the family and in the atmosphere was heartbreaking.

Kevin Sr. a few months back had resigned from his job, resulting in the family losing the house they had lived in for so long. Not long after that, the boys had been dropped from Columbia Records, meaning they were not signed to a label any longer.

Dinner was just getting finished up, and Nick and Melissa set out to help Denise clean up the table and start dishes. But little did anyone know, everyone's lives were about to change all because of a company that had had their eye on the band for a while.

Kevin Sr. hurriedly went over to the phone, answering it immediately, "hello?"

"Is this the Jonas residence?"

"Yes it is, may I ask who is speaking?" Kevin Sr. asked, waving his hand at the boys who were causing a ruckus like they usually did.

"This is the head of the Disney Channel, and I also have the president of Hollywood Records on the line. Is there anyway we could fly you and your family out to LA?"

Kevin Sr.'s eyes went wide, "yes, yes of course. When would you want us out there?" He couldn't believe that the band... the family was given a second chance.

"As soon as possible."  the person on the other line said confidently, "we would like to get the boys in the recording studio right when they get here, and we already have their first Disney Channel appearance lined up." —————— 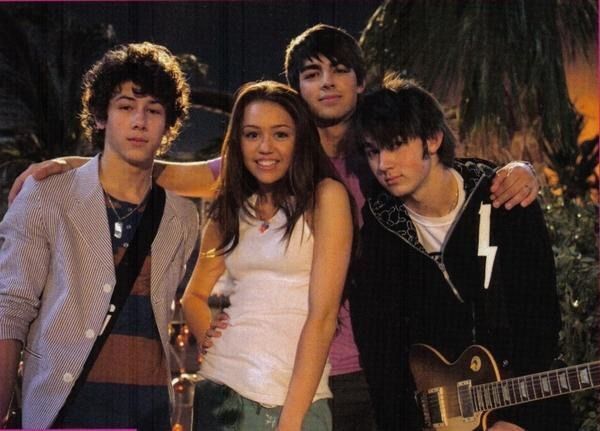 {Sometime in the middle of 2007Sunset Bronson StudiosLos Angeles, CA}

The three Jonas boys and Melissa excitedly made their way into the elite Studio, each of them couldn't contain their excitement. Nick held onto his best friend's hand, not knowing what to expect from filming a TV show.

They weren't actors, they were singers. At least that is what they thought....

"Welcome, welcome!" one of the crew members exclaimed, motioning for the four of them to come closer. "Who do you have with you? We have to get passes."

Nick looked up, "We will need three passes please, one for each of our parents and one for my best friend." he squeezed the young girl's hand reassuringly. Knowing full well that she was worried that she wouldn't be wanted at the studio by others.

There definitely was one person they hadn't met yet that wouldn't want her there.... she was a brunette little bitch.

"Miley is in wardrobe right now, how about you boys go on with her to get ready for the day?" the nice crew member asked, pointing back to the hallway.

The oldest Jonas opened the door that was clearly marked, wardrobe, and they walked in, making sure that Nick found a seat where Melissa could be nearby.

"Boys! Hello!" Miley exclaimed, coming up and hugging each one of them. "It's so nice to meet you!" she blushed, holding onto Nick just a little longer.

Yes she had done her research on them, listened to their first album, and had already grown a liking to the cute and sensitive one.

"Miley, this is Melissa... my best friend." he grinned, coming up and wrapped his arm around the girl who was looking up at Miley with a worried stare.

"Oh... at first I thought you were gonna say she was your girlfriend or something..." she sighed in relief, her hand going over her heart. "Well, nice to meet you." she choked the words out like as if it was life or death.

Time passed slowly, Nick and Melissa got closer and closer. But as Disney got word of the band, and the boys practically lived in the recording studio, the young curly haired boy was trying to stop his growing love for the girl. But he knew deep down in his heart, that she was the one for him.

Everything started changing, the boys had guest starred on Hannah Montana on Disney Channel that led to them getting signed by Hollywood Records and recording their first —successful— album and that's when the Jonas Brothers had blown up, literally. -----"Lyss, are you coming with us to the event?" Nick asked as he leaned against the doorframe of his room, his eyes not leaving hers as she got ready in front of the mirror he had above the dresser.

The young girl had been spending the summer with the Jonas family out in California, as she really had nothing better to do back at home.

Melissa's head shot up as she smiled at the boy, "yah, babe. I can, what.... are you gonna miss me or something?" she grinned at him as she got off the bed that they shared most nights and grabbed her small purse.

"Yah, sure Angel, if that's what you wanna think." Nick's voice cracked with nervousness and Melissa came up and kissed his cheek then headed out of the room.

The event they were going to was a small gathering Hollywood Records was throwing for the release of the boys' album. Everyone was so proud of them to say the least.

The party was in full swing, they had already sung S.O.S, and Year 3000. All the while, Nick was failing miserably at trying to flirt with Melissa, it was quite a sight.

Joe came up to his younger brother, who was currently lost in thought watching as Melissa talked to different people, "so have you kissed her yet, young Nicholas?" Joe joked, holding a half empty cup in his hand, and a grin plastered on his face.

Nick shook his head, shushing his older brother, "shut the heck up, Joe! I haven't yet because I don't want to ruin our first real kiss together, she's special to me... you should know this." he sighed, a blush creeping up on his cheeks.

Joe smirked, "You better do it soon, before she figures out that most of the love songs on this record are about her. What about Lovebug? Why didn't we put that on the album?" he asked, looking down at Nick, "I mean... you wrote it how long ago?"

"Three years ago now..." Nick answered, shutting his mouth after as his best friend came up, her hair curly, and a bright smile on her features. "What'd I miss?" she questioned, resting her arm on her best friend's shoulder.

Nick coughed, shaking his head, and felt his heart stop, "N-Nothing Angel, we were just talking about what we have to do next week, with the Hannah episode premiering, and the store meet-up to get the album at midnight." Nick covered up, wrapping his arm immediately around her waist. Even though he knew that the young girl knew him inside and out, he was still nervous.

Melissa looked at her best friend skeptically, as she always knew when he was lying, "You s-sure?" she asked, her hand still resting on him.

Nick nodded, smiling down at the girl he was hopelessly falling for, "Positive babe." he said, nodding at his brother before walking off with his best friend.

{When they got back to the Jonas Residence:}

Melissa sighed as she changed into one of Nick's old shirts and a pair of her pajama shorts, she had a burning feeling that they had been talking about her earlier, and she really didn't know what to do.

"Nicky?" she asked as she stepped back into the bedroom they had been sharing since she came out to California, "yes, Angel?" he smiled at her, already ready for bed.

She bit her lip as she climbed beside him, "D-Do... do you love me?" she questioned, her heart racing fast. She really had no idea where the question had come from, but she wanted.... no needed to know the answer. She didn't look him in the eye, as she knew that if she did, she'd do something her little 13-year-old self was definitely not ready for. Or something she thought she wasn't ready for...

Nick looked at her, beyond surprised, "Of course I do, what made you think that I don't?" he asked, pulling her gently to sit in between his legs. He instinctively reached up, and stroked her blushing cheek with his thumb, heart beating faster than normal.

Melissa shrugged, leaning into his touch as it was making her feel things she didn't understand. "I-I don't know... I mean, I know you love me... but do you love me... love me?" she asked, her eyes connecting with his. She hoped that the way she said her statement would cause the curly to understand what way she was trying to get him to think.

Nick's heart bursted with love for the young girl, but he still was beyond nervous at her words, "well what do you think, Angel?" he asked, interlacing their hands together.

What he saw at that moment was; fear, worry, and most importantly... love. Pure, honest love. Something that the two teens definitely shouldn't be feeling or know anything about at their age. The love surrounding the two of them, was the kind of love that people only dream of finding one day, and miraculously the two young teens found that love in one another.

Melissa blushed, not quite believing what they were speaking of at that moment, "I-I don't know... that's the thing, I can usually read you like a book... but when it comes to this... to us? I can't decipher any of it." she whispered, tears welling up in her eyes, as she tried to keep her composure. "...and that's the part that scares me most, because I don't want to ruin what we have with one another... then again we're so young and we have our whole lives ahead of us." she whispered, speaking about the subject like as if she was a fully-grown adult.

Nick wiped away the ongoing tears that fell from her eyes, "I understand that, I usually can tell all of your moods or when something's wrong." he said and leaned over so their foreheads were resting gently against the other's. "but I promise you this baby..." he started, his young voice full of love for her, "I love you more than you could ever think." he whispered, "and I could never ever fathom hurting you, or losing you. You mean too much to me. You are the one thing in my life that keeps me... me."

Now, some would say they were way too young, and that this whole crazy thing would crumble to the ground. But when you saw the way the two were with one another? It all made sense. I mean... it was Nick and Melissa.... Melissa and Nick, they could get through anything with one another by their side.

Then something occurred at that split second in time that Melissa had been dreaming of for a while now... Nick leaned forward and placed his plump little lips on hers, sparks flying for the both of them.

One thing was for sure, they were made for one another, soulmates.

"I love you." Melissa whispered breathlessly.

"I love you more my beautiful angel." the curly whispered back, his small, calloused hand resting on her cheek.