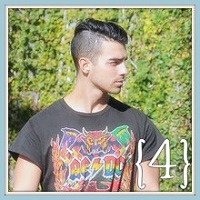 “Wake up Maggie, I think I’ve got something to say to you,” Maggie heard Joe singing in the courtyard of the complex where they lived.

“It’s late September and I really should be back at school,” he continued as he played fetch with Winston in the gated area, oblivious to the fact that she could see and hear him.

She stood there watching from behind him as he continued singing the song – sometimes replacing the lyrics by humming the melody, but then he would pick back up with the words.

“Oh, Maggie. I couldn’t have tried anymore,” he sang loudly, holding the note for longer than the actual song did.

She walked slowly down the sidewalk, watching Joe with a big smile on her face. He was wearing a black band t-shirt and a pair of black skinny jeans. She couldn’t help but notice how great the pants made his butt look. She bit her lip and laughed to herself as she continued toward the duo. On Winston’s next retrieval of the tennis ball, he didn’t take it back to Joe; he ran past him, straight to her.

“Maggie May!” Joe called out happily once he saw her. He looked surprised to see her, which meant he was just randomly singing her song. It caused butterflies to flap around in her stomach. The fact that this gorgeous man was thinking about her when she wasn’t around was enough to cause a blush to heat up her whole body.

“Joey Jay!” She replied immediately, laughing as she used the stupid nickname she gave him. His smile lit up the entire world as he jogged toward her and Winny.

“Your dog likes me better,” she teased, leaning down to pet the pooch. Winston slobbered all over her hand and wrist, licking her as she tried to pet him.

“He does. He whimpers at the door wanting to go see you,” Joe told her with a mischievous smirk on his face. What?

“Nuh-uh,” she said in disbelief, her eyes wide as she looked at him.

“He does. I just keep telling him he’s going to have to wait to see his Maggie May,” Joe confirmed, smiling widely at her. Maggie had to take a deep breath and look away from Joe to rein herself in.

“Oh, Winny. I love you, too,” she cooed, bending down to rub his ears and get a kiss from him. She giggled as the perfect little bulldog licked her chin and nose.

“Oh, you’re stealing kisses now? Huh, buddy? He likes to brag to me about how you let him kiss you every time he sees you,” Joe joked. Maggie looked up at him, her mouth going dry immediately.

“Little brat,” Joe continued, looking down at his dog.

“He brags, huh?” She asked with a smirk.

“All the time. ‘Oh, she thinks I’m such a good kisser’. ‘She loves me’. I’m like ‘buddy, you’ve gotta lay off. I’m already jealous, no need to rub it in’,” Joe went on, joking about his imaginary conversation with his dog. Maggie blushed wildly as she pet Winston on the head – they were after all ‘talking’ about her.

“He’s such a show off,” Joe said finally, sending Maggie a cute smirk.

“Hmm. I wonder where he gets that from…” She quipped as she stood up, mischievously quirking an eyebrow at him.

“What is that supposed to mean?” Joe chuckled and Maggie laughed out loud.

“Where are you headed?” He asked, changing the subject with a wide smile.

“Oh. Uh, class,” she said, patting her messenger bag that hung at her hip.

“Maggie May the genius,” Joe said with a proud smile.

Joe couldn’t help but admire her. She was a diamond with many, many spectrums of light beaming off of her. She was illustrious and mystifying and alluring and she was just so god damn smart. She was always studying – always had her nose in the books.

“Which really can’t compare to Joe Jonas the rock star,” she retorted immediately.

“Pssh. I’ll take brains over talent any day,” he insisted, knowing she had way more going for herself than he did. Her knowledge would get her through the rest of her life, whereas his fame and fortune most definitely had an expiration date.

Maggie couldn’t tell if he was talking about what he wanted for himself or what he liked in a woman. The way he was looking at her made her believe he was referring to the latter. His eyes stared directly into hers, causing her timid ones to look away because of the sheer intensity. She liked him since the day she met him five months before and she really couldn’t handle one more thing that would cement her feelings. Everything he said or did just made her heart grow for him – he always had the right words, the right moves. She figured it was just the natural Jonas charm. He must have been born with it – something that smooth and lethal couldn’t have been a learned trait. He was surely breaking hearts since 1989.

And hers since April.

“Well, you go make the grade, Mags. Me and Winston will be back here waiting for your arrival home,” he said playfully, like they were a couple or something. Her stomach clenched and her heart fluttered. Mags. A new nickname.

See, breaking hearts. He shouldn’t be saying things like that to unsuspecting girls – especially since he had a girlfriend. A very famous girlfriend, from a very famous vampire franchise.

Maggie knew for certain Ashley didn’t like her very much. She didn’t really give her the time of day – not like Joe, who went out of his way to talk to her or say hi to her even when Ashley was on his arm. And after that night at Joe’s party, Maggie knew Ashley was more than a little bit skeptical about her and her friendship with Joe. Hell, if Maggie were her, she’d be skeptical of the girl that lived next to door to her very sexy, very charming boyfriend, too. But alas, compared to Ashley, the beautiful actress, Maggie really didn’t have anything to offer. How much could Ashley really be jealous of? Maggie most definitely wouldn’t be high on Joe’s list of lovers, if she was on it at all.

“You know me – teacher’s pet,” Maggie joked, sending him a smile as she began walking down the sidewalk to her car.

“Go make me proud, Maggie May,” he called after her. She gave him a wave and continued walking.

“Winston, you traitor!” Maggie heard Joe call to his dog.

She turned to find Winny trailing at her feet – loyal to his Maggie May instead of his human. She chuckled as she bent down and picked up the adorable pup.

“You little rascal,” she cooed at the puppy. Winny licked her nose and looked at her with his bright eyes that made her melt.

“There he goes again – kissing you,” Joe said, walking up to retrieve his dog.

“I guess I’m irresistible. Huh, Winny?” Maggie said, talking to the dog in her arms.

“Something like that,” Joe said, smirking at her. Blushing instantly, she handed Joe the dog.

“You stay with your papa, mister,” Maggie told Winny and Joe chuckled.

“I’ll see you, Joe,” she said to the irresistible boy in her presence.

“Bye, Maggie May,” he said as she continued to her car.

As Maggie got in her vehicle, she noticed Joe still standing in the same spot, Winny in hand, watching her. As much as she loved the attention from him, it also made her uncomfortable because it made the ache for him grow inside of her.

She was hooked like an addict – and Joe Jonas was her drug of choice.